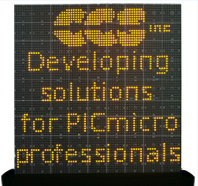 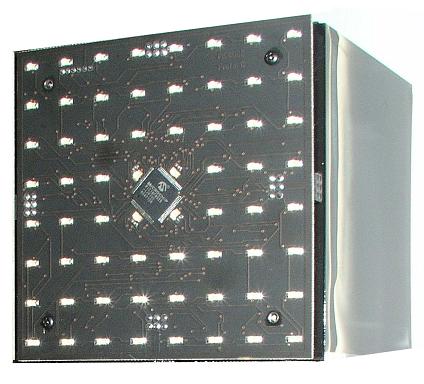 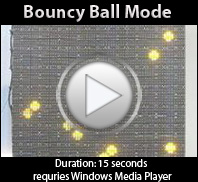 This 9x9 cube matrix is a modular design constructed to demonstrate how PIC18F8525 8-bit MCUs talk via a serial bus. Each individual cube contains one PIC18F8525 that controls each of the 64 LEDs. The well-synchronized multi-processor communication was written in C using the CCS C compiler.

Communication between the microprocessors is done via a one-wire communication, where one cube has an individual communication line to its neighboring cube. Each cube was given a unique address, where the address is based upon its location and distance from the most bottom-left cube. When a cube receives a message, it uses the destination address of the message to determine which direction to route the message on to a neighboring cube. A broadcast message can also be sent out that will be routed to all cubes on the network.

The message instructs a cube to do one of the following:

"Bouncy ball" mode is a special effect where the matrix displays via the network a ball bouncing off the 'walls'. In this mode, a broadcast message is sent to all devices telling the cubes where the ball is starting and what the velocity of the bounce will be. While in 'bouncy ball' mode, the timing of all cubes is kept in sync, and each device on the network is responsible for determining its turn to display a ball.

"Game of Life" is John Conway's Game of Life. A lit LED is considered 'live' and an unlit LED is considered 'dead'. Each cube begins play based upon its current display of 'live' LEDs. Using the general rules of the game, the spread of 'live' LEDs is based upon the microcontroller knowing which neighboring LEDs are 'live' or 'dead' and sending a message to neighboring cubes.